It’s fair to say that often my catch up with friends often include chats about sex. Or dating.  Obviously because I write this blog, people feel more comfortable chatting about intimate topics like relationships and sex but they are also curious about up-coming blog posts.  I’m pretty humbled when they share their stories and thoughts.

I once had a very playful conversation with the Producer (I’d been teasing him about his sweet tooth-sugar addiction) that went something like this:

Me: Lollies are not breakfast.

Him: You’re not the boss of me…

Me:  That’s true.  You can have anything you want.

Me:  Sure…where are you going to find two lesbians at this time of night?

Contrary to popular belief, a lot of threesomes involve three straight people. It’s not always bi, or bi-curious people who instigate although, sure, that happens too.

In the course of writing my blog, I’ve actually met a lot of women, and men,  who have told me their experiences of threesomes. Some experiences were positive and some were not. Often people who haven’t tried it are fascinated with how it all works…which is fair! Sex between two people is interesting so throw another person in the mix and that’s a lot of arms and legs and bits and pieces to navigate! Of course it seems complicated! 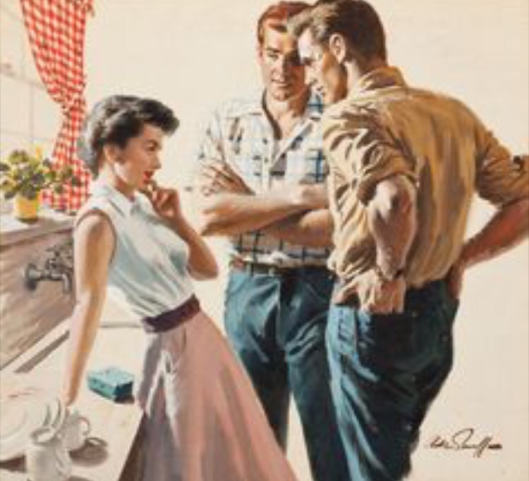 It’s not just women that feel pangs of jealousy either! A male friend once told me that he had a threesome involving his wife and a female friend. He said during the ménage a trios he was more than fine, and was loving every moment of it. In the days that followed he grew increasingly upset and jealous and felt that his wife had enjoyed the sexual affections of the friend too much. Again, in the end the friendship between the two women fell by the wayside as he didn’t trust them alone together! Their marriage survived but threesomes were never entered into again! Ouch.

Think about the why?

If you are jealous by nature, how will you react sharing two people rather than one? Only you can know but be honest with yourself.

One thing I always say regarding sex – any sex – is don’t do anything you’re uncomfortable with and be wary of anyone who would pressure you to do so!

I discussed this with one friend who said that even thinking about it concerned her. If you are reading this and feeling quite uncomfortable the thought of sharing your partner, my suggestion would be don’t do it! It’s as simple as that!

Think about the who?

One friend pointed out that the third person should leave afterwards which she felt was very important. “Time alone with your partner afterwards is really important. You both need gentle reassurance that you’re the only person that matters.”  That can be tricky of the other person is someone you know!

Inviting a friend to join a couple can be fraught with problems, so be mindful and careful about your motivation for thinking of that person in the first place, and how the third person might feel afterwards!

I had a brilliant female writer tell me once when discussing this subject, “Women get emotional, darling. They think nothing before sex but after the sex, they get emotional.” A much older bohemian woman, she quite happily shared that she’d been involved in a number of threesomes!  Ooh la la.

Think about the boundaries.

Something to consider is that your relationship with your partner is bound to be changed by the experience, either positively or negatively. It should be a positive thing!  It’s imperative that you set some ground rules. Your partner should of course be your first consideration so talking about boundaries and what you both will and won’t be okay with is important. This of course will be different for everyone.

It’s about all three people being comfortable. All three parties need to understand the boundaries, and respect each other limitations.

If you are planning to involve people you already know, be sensitive and respectful and discuss expectations and boundaries! If you’re part of a couple, make sure you involve both parties but be sure to focus on your partner! Your partner should always be your primary concern. Feelings and emotions are involved here too, not just physical pleasure! Make sure afterwards your partner knows they are your priority!

If you’re single and jumping in with two singles, talk about any limitations, make sure all three parties are okay with the boundaries and expectations and enjoy!

In all situations, remember to respect yourself and others both emotionally and physically!  Make sure you use condoms if there is a penis involved! That’s a must people! As for positions and the navigation of all the legs and arms, like all sex, don’t get too hung up on it! It will all just falls into place! If you are planning to have a ménage a trios, then I say ooh la la people! Be safe and enjoy!