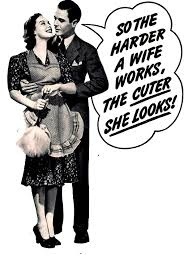 I myself have never been able to find out precisely what feminism is: I only know that people call me a feminist whenever I express sentiments that differentiate me from a doormat.
– Rebecca West

Tomorrow is International Women’s Day and it needs to be said – I damn well love being a woman. Not that I am expecting this auspicious occasion to be marked with any fan fair at my place, but I think it’s important to recognise that women are pretty awesome.

In the spirit of proudly embracing my inner chick (yes, I mean feminist), I was thinking about how much or little has changed over generations of women in terms of how we view our place in the world.

Okay this all came about when my man, the Producer, who has male-feminist leanings, bought me a cute little book (very tongue in cheek) called “Don’ts for Wives”, written by Blanche Ebbutt and first published in 1913.

Before you start jumping to any conclusions, or baying for male blood at the thought of such a gift, he bought it for me because I have a few of these little published gems and I love them – I find them fascinating in terms of societal thinking in by-gone eras and they make me laugh, so it was a thoughtful thing to do. Oh, and no, it wasn’t a hint that he’d like me to a) be his wife or b) that I’m not an awesome kick-ass partner and in need of some antiquated guidance!

Of that I’m sure on both counts!

Obviously in 1913 it was necessary (or at least expected by society) for men and women to be married in order to live together, and to have children and of course times have changed. It’s now common for couples, gay and straight to live together sans marriage and a lot of people have kids out-of-wedlock, and indeed choose to do so even in the absence of a partner.

I have to say that Blanche Ebbutt, believe it or not, has imparted some true pearls of wisdom about relationships that actually make sense even by today’s standards. In fact had feminism even been a thing in 1913, Blanche might have been part of the ideology.

Now I’m not going to hold up Blanche as the Clementine Ford or the Gloria Steinem of her generation. That would be going too far (especially since some of her advice from that era sent chills down my spine!) but what this cute looking little book highlighted for me was how some things change and some just don’t change fast enough!

My own mother, who went from burning her bra in the fight for women’s rights, to wearing cross-your-heart bras in the backlash conservatism that seemed to drape over many a baby boomer like an ominous cloud, raised her daughters to be strong and independent. I was never mollycoddled, that’s for sure.

She encouraged me to read. She told me stories of the flower power era and the sexual revolution with a certain glint in her eye. She also quite happily cooked my dad breakfast every single day of his working life. She was a stay at home mum and once in my teens I called her on that. I think I actually accused her of being a feminist sell out.

What I remember clearly was this. She put her hand on her hip, looked me up and down eventually setting her eyes firmly on mine and said, “Child, I fought for your right to choose whatever life you want. Feminism isn’t about what job you have or where you live, or having hairy legs. It’s living your life how you choose to. Full stop. If you want to be a writer, go do it. If you want to be a mother, do so. If you choose a life less than you want, don’t bitch and moan about it, but don’t ever think you have the right to tell another woman how they should live theirs.” With that, she continued doing the dishes. Snap.

That was a valuable lesson for me in terms of what feminism meant. Women living a life that was authentic and of their choosing. Not one ruled by what society deemed appropriate or men deemed appropriate, or their parents chose for them. I’ve been accused of not being a feminist because I write this blog, about my life – about my experiences of being single and dating, and of being in a new relationship and admitting that I, like a whole lot of women, like sex. Gasp!

I’ve also had people ask why I’m a “mummy blogger”…firstly women who write blogs can be called bloggers or writers – they aren’t all mothers but they do all seem to write. Secondly, though I’m a mother myself my blog is hardly a tale of children. It’s not a mummy blog.

I’ve also been both praised and admonished for using the word vagina a lot…but all chicks have one and it’s not a dirty word! I for one, am glad I have one.

What resonates with me is my mother’s words. I am most certainly living my life the way I choose – and when the going got tough in my life, I was tough enough to keep going. I am, quite proudly, a feminine feminist. As a single mother, I’ve felt another layer of womanhood. Trying to juggle, work with the realities of parenthood, a relationship and writing.

I look at my daughter, Miss 16 and I admit as a mum that I often worry about the world she and her brothers will inherit.

I’m raising Mr 13, just as I’ve done with Mr 23, to respect women. My boys tower over me (yes even Mr 13 already) but they don’t talk down to me. They treat their sister like an equal, and she gives as good as she gets when they tease one another. I once told my eldest to remember in life that every girl he meets, kisses or has sex with in this life is someone’s daughter, someone’s sister and simply someone. He has a girlfriend and I’m happy to report that he treats her as she treats him – as equals.

He is protective of his younger siblings, in particular his sister and while it’s nice for her to feel safe, she also needs to feel confident in the knowledge that she can handle herself also.

I’m raising my kids to be thinkers, I hope, and not simply sheep. I have a habit of staying quiet if my words might rock the boat and that’s something I am working on overcoming, mainly because it’s not something I want to teach my daughter. I want her to believe in herself and to know that her views and ideas are as valid as those of any man, even if they are not embraced by others.

So it angers me that violence against women continues and that we need advertising campaigns to remind society why that isn’t on. It angers and disappoints me that my country is being ruled by a politician that sees no deficiency in having only one token women in the cabinet. A leader who feels more women should stay at home whilst implying that women use abortion more as convenience than a right over their own bodies.

It disappoints me that there is still a disparity between the wages and superannuation of men and women in this country. It concerns me that education is still slanted depending on your sex, and that chicks can’t play football at an AFL level if they are just as talented as their male counterparts. It disappoints me that we are not taught about money is schools. It even disappoints me that in this day and age, actresses are still fighting for more screen time than actors, because all of this tells me that while my daughter may be able to be anything she wants, she will have to fight harder than a man to achieve what he has. And that sucks. Her grandmother burnt her bra, people! How is this still possible!

Times have radically changed for women since 1913, and indeed even since the women’s movement of the 1970’s. So much more still needs to happen though. I’m hoping if I have grandchildren they won’t even be discussing this – things will simply just be on an even playing field for men and women. I remain ever the optimist!

In the words of Blanche, I leave you with this little pearl, though we can quite easily change the word husband to ‘any man’.

“Don’t be talked down to by your husband when you want to express your views on any subject. You have a right to be heard.”

2 thoughts on “The Feminine Feminist – I like being a woman!”